We are very proud of three of our pupils this week as they have all won prizes in the Tower Hamlets Creative Writing competition!

Well done to these excellent pupils - your hard work has paid off! 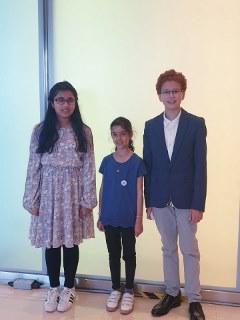 Zayd and Rida wrote accounts of what happened on the day. Here are some extracts from their reports:

Going to the award ceremony at the grand auditorium in Canary Wharf felt like going to the Oscars. The wait and pressure were both thrilling and nerve-wracking at the same time. The crowd was cheering and supportive; judges welcoming and encouraging.

I am delighted to have won a prize place and I'm immensely proud of the success of Hermitage School this year. Go Hermitage!

When we entered 10 Upper Bank Street, we were welcomed with warm smiles. Marveling at the paintings and the stained glass designs, I walked over to the set of tables full of crisps, teas and juices. Helping myself, I spotted Zayd and Maryam sitting on the steps. We took our seats and one of the judges made an inspiring speech. Then the award ceremony began. Eager little brothers and sisters squirmed in their seats and equally excited parents beamed at their award-winning children. As the evening went on, more and more people had shaken hands with the judges - including me! It was truly an experience to remember.