On Monday, 4th July, a group of Hermitage pupils visited the Unicorn Theatre to hear the exciting announcement of the new Children's Laureate for 2022-2024.

The children’s laureate is awarded every two years to a renowned writer or illustrator in recognition of exceptional talent.  Past laureates have included: Quentin Blake, Malorie Blackman and Jaqueline Wilson.

When our pupils first arrived at the star-studded reception, they met the one and only Michael Rosen. The famous poet posed for a photograph with all the Hermitage pupils. “He was hilarious”, revealed Ayesha, who was chatting to him about his poem, ‘Chocolate’!  Also, Kaimarni enthused, 'He was kind, funny, and gave me a fist-bump!” Amongst other guests were Axel Scheffler, Francesca Simon and Philip Ardagh.

The event began with the current Children’s Laureate, none other than Cressida Cowell, author of ‘How to Train Your Dragon’, looking back on her three years in the prestigious post ; she talked about how important new school libraries are for children’s education.  She was full of energy and passionate about children reading. Due to the pandemic, she had an extra year as laureate.

Following this, the new Children’s Laureate was revealed: the poet Joseph Coelho!  He had inspiring words for the audience:  "Everyone can write a poem," he exclaimed. Then he invited everyone to join in reciting his specially written new work, ‘The Power of a Poem’.

At the end of the exciting event, Joseph went off for his BBC and other media interviews, while the Hermitage students were treated to an ice-lolly, as they walked back to school!

'It was an unbelievable day!' concluded Kaimarni. 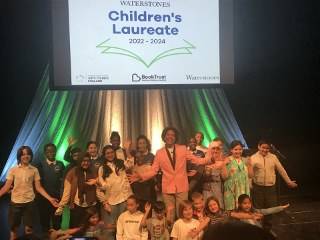 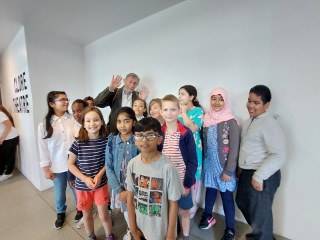